Properly called the America Windows, they are what everyone in Chicago has called the Chagall Windows for as long as I can remember, and I was born some years before they were installed in the Art Institute of Chicago in 1977. A tribute to a city and a nation from the great Russian-French-Jewish artist and refugee to America from war-torn Europe, he was one of the original Modernists, transversing almost every visual medium. He chose to paint glass to honor the music, vibrancy and diversity of Chicago.

I had always found them beautiful, but the windows had never been more interesting than the allure of luminous cobalt blue. Yet I always notice a change in taste upon every visit to the Art Institute of Chicago, the most recent of which found me halted in front the America Windows, contemplating many things about the city in which I had been born. Although I had seen the windows countless times, it was the first time that I paid much notice to the diversity illustrated by the musical instruments and religious symbols blended together in the blue sky where a dove of peace flew, reminding me of an America I thought I had known when I left if over twenty years ago: a multicultural America that exalted diversity, an America on course for diversity.

Two years ago, however, an election revealed aspects of another America, one in which there were many Americans wanting the opposite of diversity. It was the eve of that election that inspired the very first piece for my blog. Called On the Outside looking In, it was based on a conversation I had had with a friend, a young man who would be emigrating to America from another country. It was the narrative in which I had decided to reveal a conviction of mine, regarding the importance of doing a certain homework in locating the prejudices that lie in each and every one of us. For the opposite is to accept ignorance, which turns into a dangerous weapon when fear and disillusion run amok — which is exactly why Chagall had fled Europe and exactly that which is currently being wielded by those wanting the opposite of diversity.

That said, two years later I found myself once again in Chicago and staring at the America Windows. But this time, I was enthralled by them not only for their cobalt beauty: it was the dynamism of the America that Chagall had praised with such love that arrested me. What happened? I asked myself in a cynical afterthought, imagining what the great artist would think about the current treatment of refugees, immigrants and otherness.

I imagine that, as a refugee, Chagall must have had a vision of the country that would remain as an outsider looking in. And I believe that is the perspective from which he painted those windows, in great appreciation of the diversity of a welcoming nation. Ironically, it was in front of those windows on this my most recent visit to the museum that placed me on the inside looking out — through the Chagall windows — at the great and equally multicultural country that I have called home for over twenty years, a country which is currently and brutally divided on the eve of its own election, one that is scarily reminiscent to that of Trump’s. Needless to say, in Brazil I am reliving the stress of a divided society all over again .

It seems I can’t get a break anywhere.

Except at the Art Institute of Chicago. Although I am not one for museums, I have a special relationship with this Chicago bastion, because I feel like I have grown up in it. No trip to Chicago goes without a visit to the museum, allowing me to continue an experiment in observation that I discovered years ago when beginning a practice of sitting quietly watching how the mind is led in directions by our taste and our aversions, seeing how our five senses naturally head for the things we like and flee from things disliked. I discovered we have less control over our tastes and aversions than we think — some of which we do not even choose — and others that morph over time. When I was young, I used to be awestruck by the famous Impressionist collection, whereas today I find this style to be too sweet for my taste. Over the years my taste gravitated to the Dutch masters and then into the Oriental Art galleries. There had always been certain aversions, one of which remains unwavering: I have never even set foot in the Contemporary Art Wing of the museum since it opened. It is part of a prejudice — among those things we must locate if we are to have any chance of examining them, bringing them to consciousness with words, or simply guarding them until a more opportune moment so that no one gets hurt. Then, of course, there are those tastes that you thought you would never have, appearing out of nowhere. Curiously — surprising even unto myself — today I find myself mesmerized by the American Art galleries, revelling in their mixture of styles and techniques that encountered one another in a “New World”.

A multiplicity that includes Mexico — a country and civilization that finds the expression “New World” comical.

It may have been due to the fact that I had just arrived from Mexico that one painting in the American Art Gallery immediately seized me: 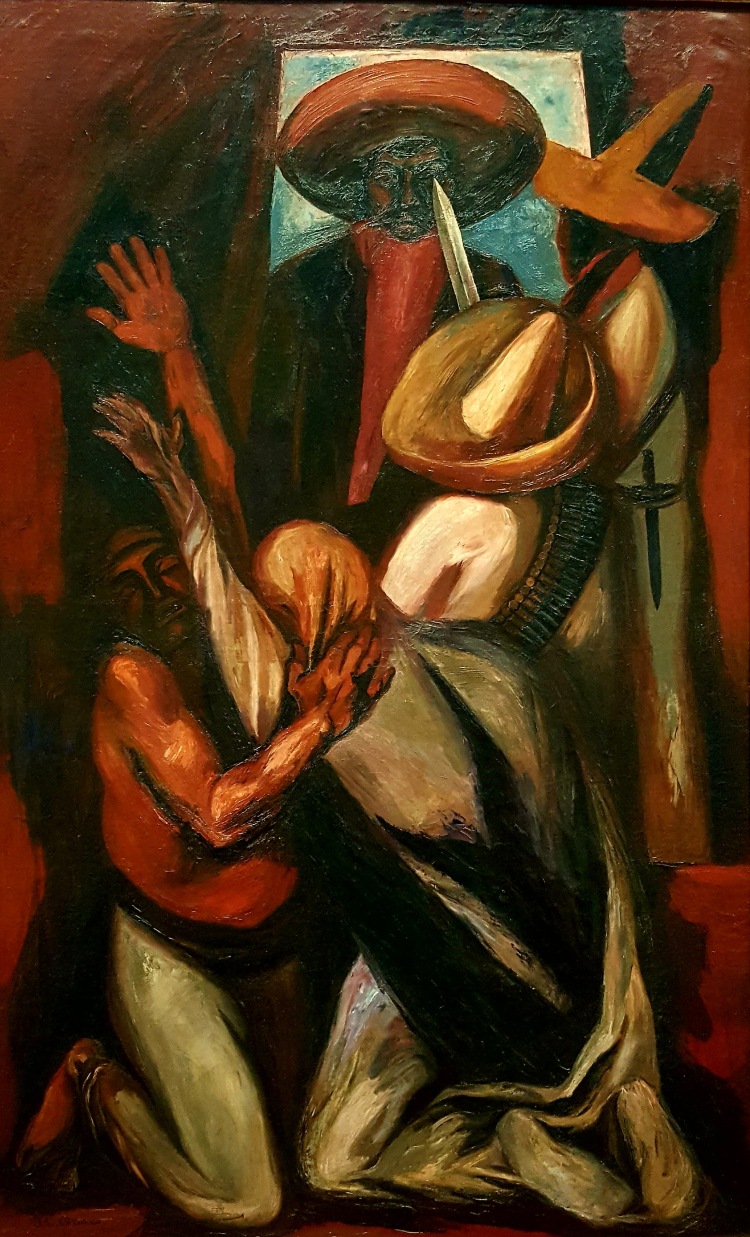 José Clemente Orozco painted Zapata (1930) while in exile in the United States. The great Mexican muralist made a dramatic rendition of the legendary, assassinated leader of the Revolution arriving in the doorway of a distressed peasant home.

La tierra es de quien la trabaja con sus manos, I thought, remembering the famous words of the revolutionary leader who pronounced that land belongs to those who work it with their hands, before taking up arms against an entire system, centuries of abuse, in yet another frightening moment of world history when the neglected had enough and rose together to deliver the limit at any cost imaginable.

“And that happened before the Russian Revolution,” said my nephew, historian Fabián Calderón, reminding me of the curious historical fact with a toast of pulque, as we sat in Puebla, Mexico, just a week prior to my museum visit in Chicago.

Ching-ching! We slammed our mugs of fermented cactus milk together in a toast.

Orozco’s painting immediately took me back to the table with my nephew, with whom I share a taste for politics and history, as well as for pulque. I had been happy to translate his Childsplay and Barbarity in San Cristóbal de las Casas: a return to Chiapas, a thoughtful portrait of how the Insurgency feels today — from the outside looking in — after his recent return visit the southern lands of the Zapata, where there is still great suffering.

We had spent a few days discussing the recent and momentous election of López Obrador in Mexico, and the hopes that it would bring real change and reform to the country of the Permanent Revolution, underway since Porfirio Díaz was ousted in 1911, as well as how high the stakes always are for both the success and failure of liberté, égalité, fraternité in the world — and how unending is this process, be it Mexico, the US, Brazil or anywhere else.

As I left the museum, I heard Fabian’s voice in my head once again from across a continent: “What about Mr. Trump? How has America changed with him?”

Looking out from the steps of the museum over South Michigan Avenue, I would say not at all. The boulevard looks just as majestic as I will always remember it. It is the center of the heart of the city, people scuttle off, to and from work; there are a few beggars; there are tourists; there are musicians. There are some things that never change and others that have transformed, and I decided to photograph them.

“I guess I wouldn’t really know any more than you what has indeed changed and what has only been revealed,” I had responded to Fabián, exasperated by the news everyday, dealing with the incredible, everyday. Everyday, accepting the new limits of hypocrisy.

Walking to the corner, I looked toward the lake and saw the newer annex, the Contemporary Art Wing of the Art Institute. It was then that the words of Gandhi — be the change you wish to see in the world — immediately came to mind, annotating the thought that I shall visit the gallery upon the next trip to Chicago, because if I expect others to deal with their prejudices — paying attention not only to their tastes and aversions, but also their objects of indifference — I must continue to test my own.

Because, I think, the opposite is to close doors, shutting oneself in a safe place out of fear,  dedicating one’s life to nothing more than one’s tastes, opting for the unchallenged life. That is what I saw in the one of painting of the museum that shall forever be imprinted on my memory: Ivan Albright’s painting, That which I should have done, I did not do:

2 thoughts on “Looking through the Chagall Windows”

The Bhagavadgῑtā & The Yoga Sutras

A native of Chicago, Ricky Toledano has lived in Rio de Janeiro, Brazil for over twenty years as a writer, translator and teacher. [a]multipicity is multi-lingual collection of reflections through the humanities.